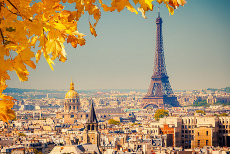 Instagram, FourSquare, Snapchat and Co. have revolutionized tourism: memories cannot only be captured but can be shared online in an instant. Enough reason for us at CheckMyBus to take a closer look at the online fame of some of Europe’s most popular sights. Where are most selfies taken? What is the most searched tourist spot on Google? We have analyzed Europe’s top sights and tell you how to get there for little money – so stop browsing Instagram and book your Euro trip now!

The team at CheckMyBus scanned all of Europe for the most popular sights on the internet. To come up with a ranking, we analyzed the most frequently googled and the most frequently instagrammed points of interest. The result is a list of sights ranked according to their online popularity in 2015.

Curious?
Carry on and take a look at them!

From iconic buildings including Big Ben and the Eiffel Tower over leisure hotspots like the Oktoberfest to impressive landscapes such as Mount Etna and the Amalfi Coast – Europe has a lot to offer for travelers. London in particular could secure the top spot in tourists’ hearts: While Big Ben itself has to admit defeat to the Eiffel Tower as No. 1 sight, the British capital can pride itself on the most amount of sights among the European Top 50. With nine tourist attractions, it comes in first place ahead of the French capital Paris with seven. As far as countries are concerned, France and the UK go head to head. The two states contribute eleven sights each to the European ranking, amongst them Stonehenge or the Palace of Versailles. Following behind are Italy with nine sights as well as Germany and Spain with six points of interest each. 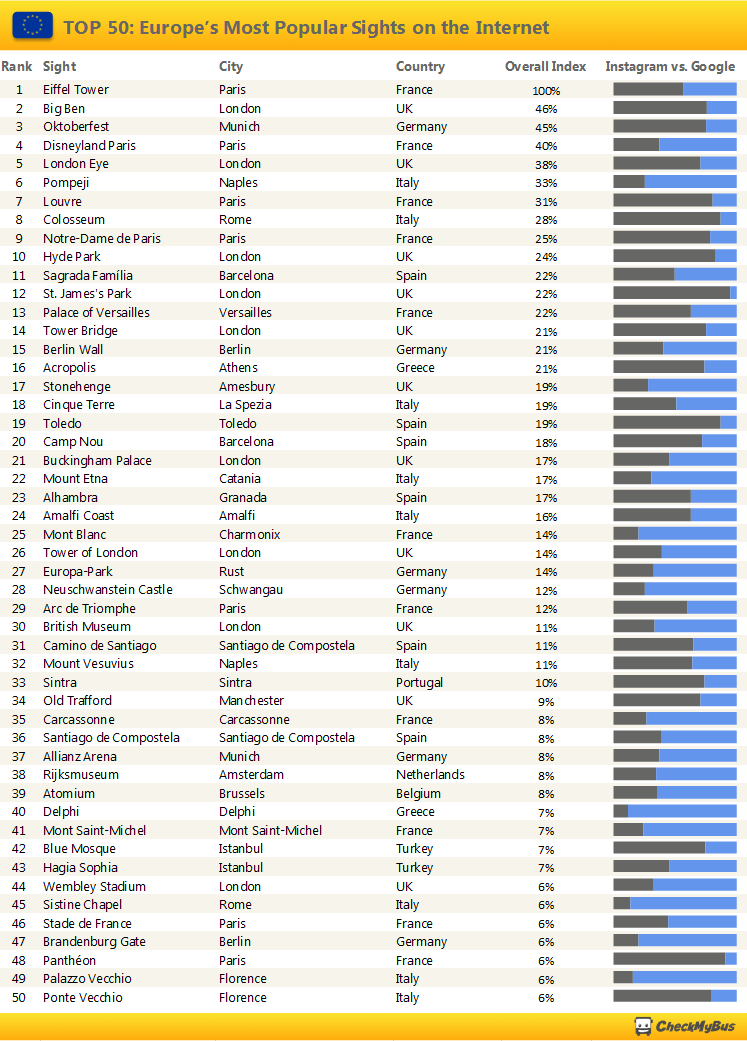 The Eiffel Tower Tops Them All

When it comes to tourist attractions, there’s no sight as iconic as the Eiffel Tower. Famous as ever, Paris’ distinctive landmark is the No. 1 spot for tourists to take selfies in front of or to research on Google. On the internet it is twice as popular as our No. 2, Big Ben. Although London’s clock tower might not be less iconic, it clearly has to acknowledge defeat when it comes to online popularity.

Every 10th Top Sight is a Soccer Stadium

While Europe is famous for its ancient culture, it also values fairly recent traditions and trends. The UK is known as the home of soccer and many other European states have been infected with a fascination for the sport as well. It is not surprising then, that there’s five soccer stadiums among the Top 50 tourist attractions. When you’re on your Euro trip, why not join the fun and visit a match at Camp Nou, Wembley Stadium or the Allianz Arena?

Castles and palaces are not a rare sight when going to Europe. Stately buildings such as Buckingham Palace and Neuschwanstein Castle adorn picturesque landscapes and grace cities. However, one tourist attraction can put them all to shame: the Oktoberfest. Held once a year, Munich’s large-scale beer fest is the Top 3 spot to take a selfie or to research on Google. So when in Germany, do as the Germans do and get your beer in a traditional 1-liter stein.

Get more bang for your buck: discover Europe by bus!

If you want to go to Europe, then stop flicking through Instagram and book your flight now. Once you’re there, you will not have to choose between Big Ben, the Eiffel Tower or the Oktoberfest. Why not visit all of them? We have compiled three inexpensive bus routes that will allow you to make the most out of your Euro trip.

Route 1: The Big 5
Europe’s Top 5 sights are spread over only three cities and all of them can easily be reached by bus. Start your trip in London to take a selfie in front of Big Ben and the London Eye. You can then board a bus to Paris in order to take a look at the Eiffel Tower, Europe’s No. 1 tourist attraction. From there, you should continue your journey and catch a bus to Munich. The whole trip will cost you less than $40 – you only have to make sure to go in late September or early October in order not to miss the Oktoberfest, our No. 3. 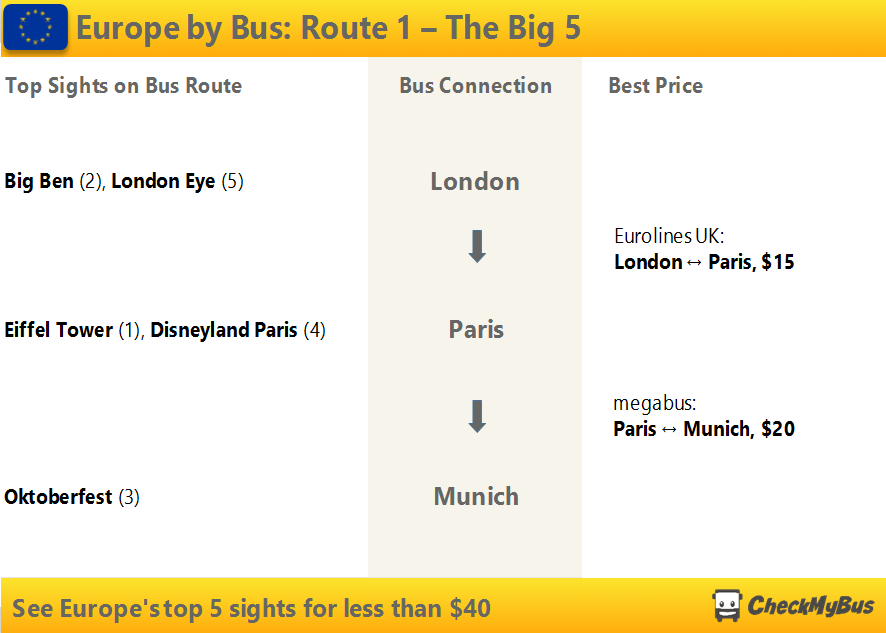 Route 2: The Sunshine Route
Start your trip on our Sunshine Route in beautiful Barcelona and take a look at Gaudí’s impressive Sagrada Família. Afterwards, board a bus to Paris and visit the cities top sights including the Louvre Museum and Notre-Dame de Paris. Your next destination could be Munich – Europe’s leisure capital – where you can visit a soccer match at the Allianz Arena or walk around the Oktoberfest, if the timing is right. From Munich, it’s only a short distance to Florence. The Italian city is abundant in historical buildings and striking art. The final destination on our Sunshine Route is the Italian capital Rome: here you can not only enjoy famous sights such as the Colosseum, but also indulge in original Italian cuisine and beat the heat with Italian gelato. The whole tour can be booked for as little as $75. 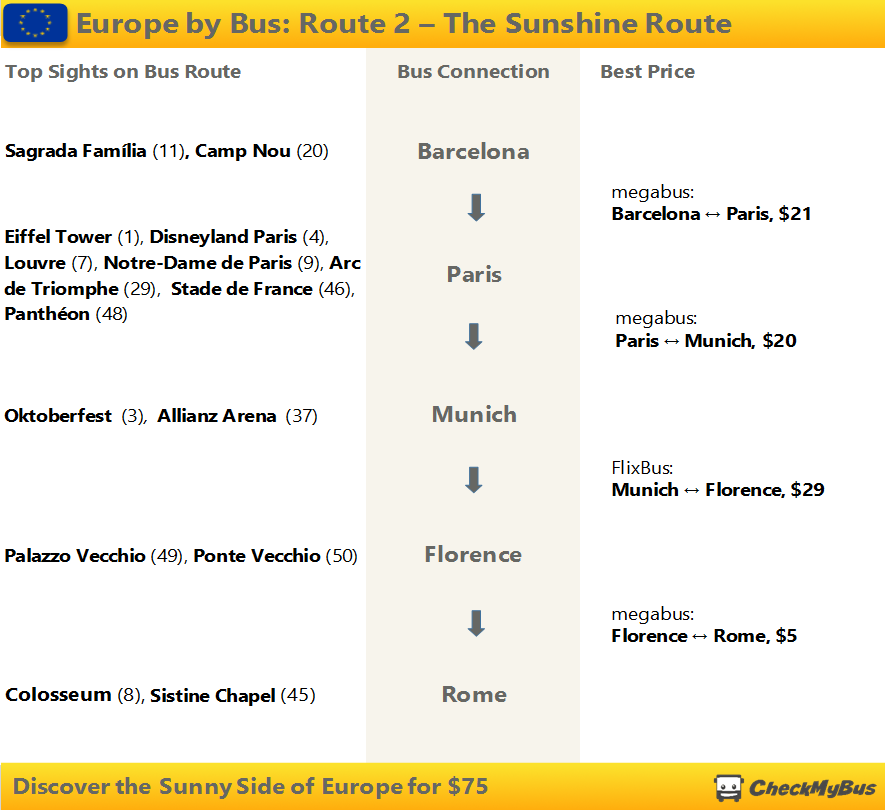 Route 3: All In!
Route No. 3 is a bus trip for true experts. It takes you from Barcelona to Paris, then on to London – Europe’s sightseeing capital – and on to Amsterdam. From Amsterdam you can board an inexpensive bus to Munich. After a stop in Florence, your trip can end in Italy’s capital Rome. On this bus route, you have the chance to visit a total of 24 out of the 25 European top sights. You can even make it 25 if the Oktoberfest is on during your travels. The whole bus tour – consisting of six individual journeys – can be booked for under $130. A true bargain in the eyes of every sightseeing lover! 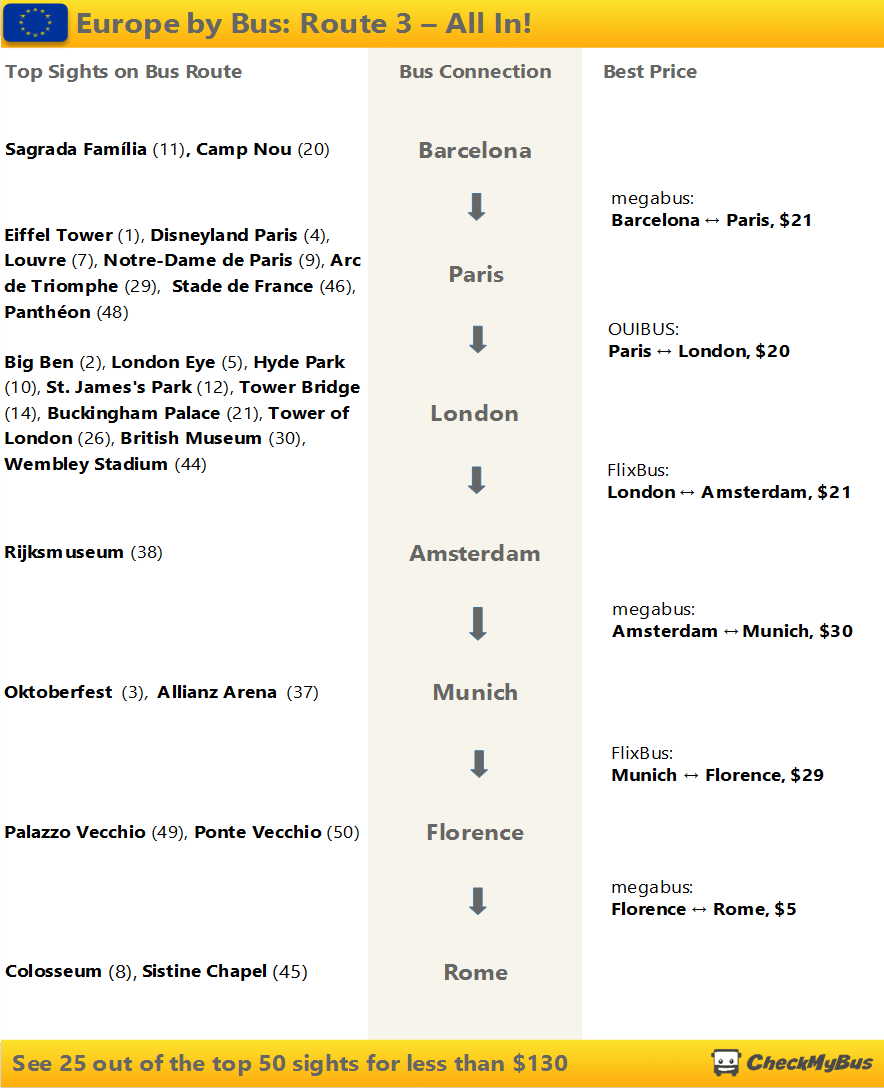 Methodology:
A preselection of points of interest was accumulated by taking into account diverse sources including touristic web portals and the official list of UNESCO World Heritage Sites. The more than 600 sights, resulting from this preselection, were singled out according to several criteria. Finally, 450 European points of interest were analyzed in terms of their Google search volume data and the amount of pictures uploaded on Instagram. Respective keywords and hashtags were translated into five languages in order to ensure that the search/upload was based on touristic interest only. Individual cities were included when it could be assumed that the city was purely looked for/instagrammed for its touristic value (e. g. Carcassonne). On the basis of the monthly search volume and the number of Instagram posts under the respective hashtag, an index was created per country and for the whole of Europe. The top-rated sight was thereby assigned an index of 100 percent and all further tourist destinations were ranked accordingly. The connection of the two sources shows those sights, which are most popular online: while Google search requests serve as an indicator for general interest, Instagram uploads attest to actual tourist activity on site. For instance, Big Ben is only rarely searched for on Google, yet it is very frequently photographed by tourists on the spot.