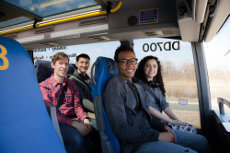 The demand for traveling by bus is on the rise in the United States, while the passenger airline and rail industries are approaching a saturation point. The Boeing Company has noticed a reduced tendency in traveling by air since 2009. Later Airbus stated that the airline industry in the domestic market has been experiencing a slow growth of 2.7% annually and the number of served lines dropped by 3.5% in 2014. As for the rail industry, the issue of demand growth is not any better. Train services organized by Amtrak increased by a negligible rate of 0.5% in 2010 and there has not been any noticeable change so far. An upsurge in fuel price and higher charges for emission are the major factors among others that caused the increase of ticket prices, bringing negative results to the customer demand.

The bus, on the contrary, has gained significant popularity over the past few years. This mode of traveling is noted for its cheap tickets, low CO2 emission and premium services, such as on-board Wi-Fi connection, free luggage service and wider legroom. All of this has resulted in steady growth in demand. According to DePaul University’s research, the bus service has been the most rapid growing mode of transport in the US for three years in a row and the total amount of daily departures from both curbside and traditional bus companies like Greyhound Bus and megabus increased by 6.01% in 2010. That was three times higher than the air industry in the same year. Again in 2014, over 100 daily bus services were added, which represents a 2.1% increase compared to 2013.

“Once people switch to the bus, they often become frequent users, in part due to the generous allowances bus companies provide to change departure times,” says Joseph Schwieterman, director of the Chaddick Institute at DePaul University. He strongly believes that travelers are in favor of the flexibility provided by the bus as opposed to the more stiff air travel service.

With the significant development in the bus industry, the reputation of traveling by bus has changed: While previous generations have regarded it as more of a necessity, citizens today view it as their favorite form of intercity travel across the USA. During the past decades, the bus mainly served low-income passengers and was considered as a mode of last resort, according to Schwieterman. Nevertheless, nowadays it has successfully attracted large amounts of travelers with various backgrounds and has become especially popular among young people and leisure travelers. Additionally, the bus is also getting more attention from family travelers with its inexpensive bus tickets, starting at $1, which was a big surprise for most of them, according to the researches. When they discovered the low-cost ticket, comfort and service as well as the flexible connections between cities offered by bus companies like Boltbus and Trailways, they would consider shifting their former mode of transport like car or plane to bus travel.

Given all the signs from the industry and the growth of bus travelers, the bus service will continue to expand its routes and connections throughout the United States in the future.